The patella (commonly referred to as the kneecap) may at first seem like a vestigial structure that too many of us errantly smack into tables and otherwise traumatize with random activities. Do we even need to have a patella to perform our day-to-day tasks?

I do actually know somebody who had his patella removed due to a motor vehicle accident. He gets around relatively fine, but when we take a closer look from a mechanical perspective, it makes more sense as to why we have developed this odd bone over thousands of years.

Our muscles are able to move our joints through space largely due to the physical concept of torque. For us physics nerds, torque in a very basic sense is equal to force times distance.

This simplified equation dictates the larger the force, or the greater the distance this force is applied to an axis of rotation, the greater the torque. A neat way to illustrate this concept involves the mechanics of knee extension and how the patella actually helps to increase the torque involved. 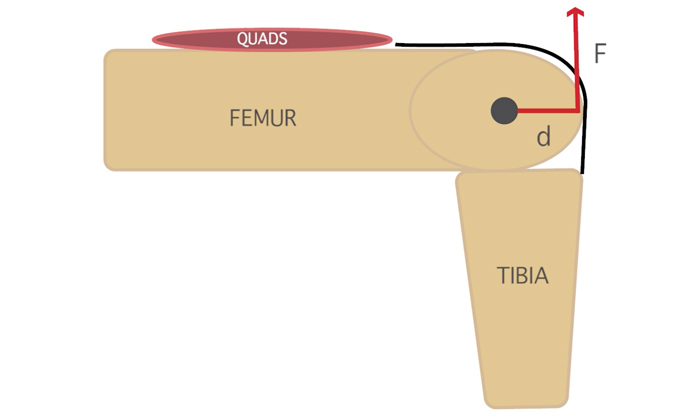 Here we have two visuals that depict a knee. The first shows us how the quadriceps muscle applies force through the patellar tendon to straighten, or extend the knee. You can see that the “distance” that we referred to in the torque equation is represented by “d”, and it is measured from the axis of rotation to the patellar tendon’s line of force. 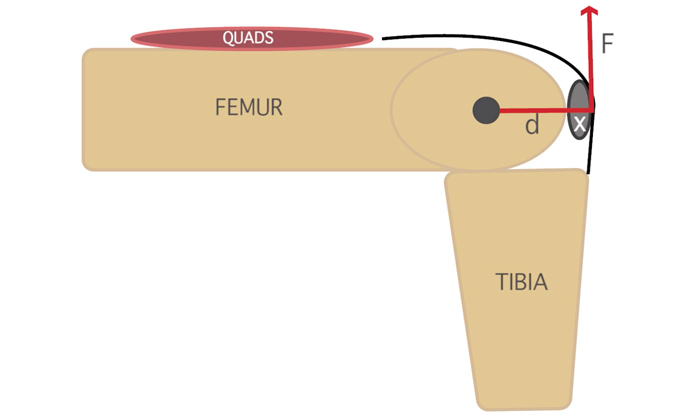 Now take a look at the second illustration. We have added in the patella. See how the patella actually increases the distance from “d” to “d+x”? The patella increases the total torque of the system simply by increasing the length of the distance of the force line from the axis of rotation. This gives us an advantage, and it occurs for the same reason that sitting further away from the fulcrum of a see-saw tends to “even things out” when a heavier person is sitting on the opposite end.

Evolution is a neat thing indeed.