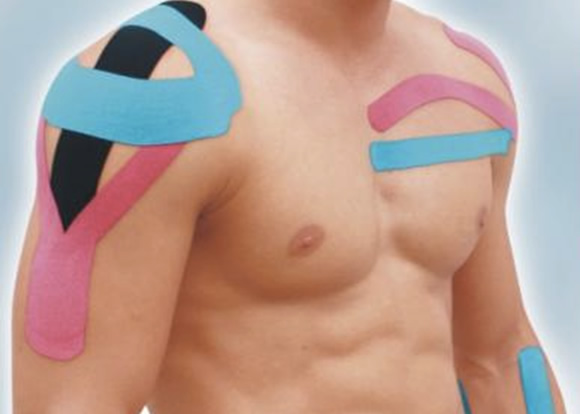 You may have noticed that many track athletes, volleyball players, and even platform divers at the London Olympics were competing with visible strips of tape on various parts of their bodies.

What purpose does taping serve for athletes?

To start with a simple example, traditional “athletic taping” is used to immobilize joints. The most typical example of this would be taping to immobilize a sprained or otherwise traumatized ankle. A usually white, firm tape is wrapped (many times) around a sprained ankle, with the end result looking somewhat like a cast. The most common athletes seen with athletic taping needs in the Olympics are gymnasts and soccer players due to the frequency of ankle sprains. Athletic trainers are very adept at taping ankles in this fashion.

“Buddy taping” is a simplified form of athletic taping. Broken fingers or toes need to be protected during competition: wrapping the finger with tape to an adjacent finger stabilizes the entire finger and lessens the possibility of re-injury.

Taping can also be used to physically change the position of a bone or joint for therapeutic purposes. Runners will at times suffer from a patella (knee cap) that does not track ideally in the underlying groove. “McConnell” taping (devised by a physical therapist) was devised to assist the patella back into the groove by gently pulling the patella slightly to the side.

Taping is also used by physical therapists to make people more aware of their posture. For example, stiff tape placed between the shoulder blades can keep a patient from slouching into a forward position while working at a computer. Correct posture, and strengthening of postural muscles, can be facilitated through taping.

The more colorful type of taping that most of us saw donned by many athletes at the Olympics is called “kinesiotaping.” This type of tape is physically different from the other types of tape mentioned in that it has an elastic quality to it. When kinesiotape is applied to an area, the elasticity of the tape slightly contracts and supports muscle and soft tissue. This arguably will lessen the strain on an already abused muscle.

The makers of kinesiotape also suggest that it will assist to facilitate the contractions of muscles and flush small amounts of swelling that may accumulate in damaged muscle. There is currently research being performed focusing on whether or not kinesiotape has these positive effects. Either way this taping certainly looks cool.