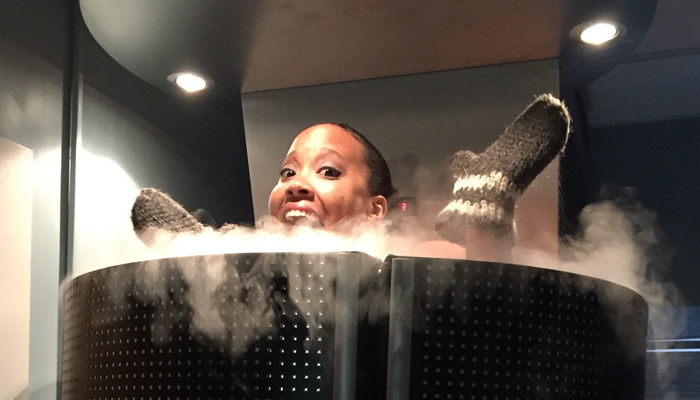 In the last few years people have been hearing more and more about these ever so popular cryogenic chambers that have seen the likes of professional athletes, such as LeBron James, Floyd Mayweather Jr., and Christiano Ronaldo – just to name a few. The cryogenic chambers make many claims from inflammation reduction to alleviation of depression and anxiety, prevention of osteoporosis, to cellulite reduction and even decreasing visible signs of aging.

Why was I interested in taking the plunge? Why not! Ever since I first heard of these devices about 3 to 4 years ago on the morning news, I thought, “I would do that.” After all, I much prefer the winter over the summer and play outdoor soccer usually in early March all the way through late November, rain or shine. Surely I could handle somewhere between -184F and -292F for 1.5 to 3 minutes. Here’s my experience. 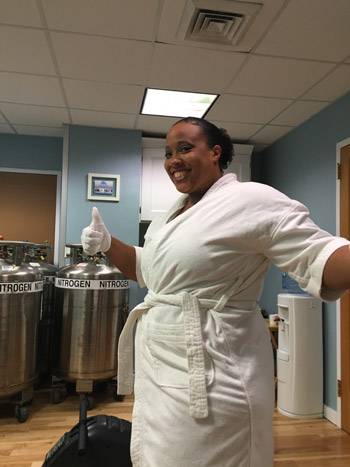 After an evening of eating too much and probably drinking too much on Thanksgiving, I managed to roll myself out of bed on the biggest shopping day of the year and make my way down the West Side Highway of NYC to 57 W57th St. This is where I found Kryolife.

I made my way up to the suite and filled out some basic demographic forms that asked some pretty important medical history questions, considering the activity about to take place. Any history of neuropathy, diabetes, Raynaud’s Phenomenon, hyperhidrosis, claustrophia, etc.?

After handing in my forms, I was escorted to a small changing room that had a white robe, white crew socks, white gloves and a towel. I was instructed to use the towel to dry off any part of my body that may have been a bit sweaty or had any moisture on it. I got down to my undies, covering up with the items in the room, and when I opened the door, I saw a pair of white wooden clogs waiting for me. 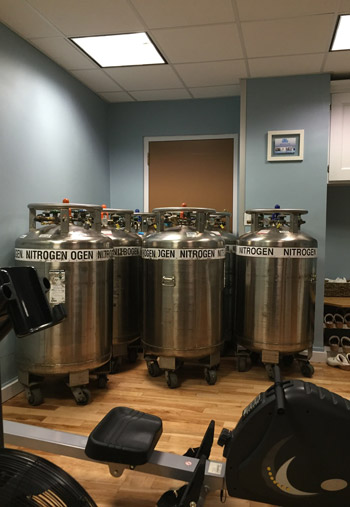 As I waited my turn, I stared at the large tanks of nitrogen gas that are a bit intimidating. Next thing you know, the door opened, and then it was my turn.

Inside was a lovely woman that handed me some mittens to go over my white gloves and explained that I would hand her my robe and step into the chamber. At that point, she would elevate me so that my head would be sticking out the top of the chamber.

She told me to keep my hands visible at all times, to try not to inhale too much of the nitrogen gas, to keep my chin up, and and to be careful not to touch the walls of the chamber. All these rules were a little nerve wracking. After all, it was recently in the news that somebody died in one of these things.

Before I knew it, I was stepping into a narrow cylinder that had a frosty fog coming from it. I was slowly elevated and lifted my hands up to be visible and also give a nice thumbs up. I started to feel a whoosh of chilled air on my legs and back. I luckily found distraction by posing for the many photos that were being taken of me by my mother. 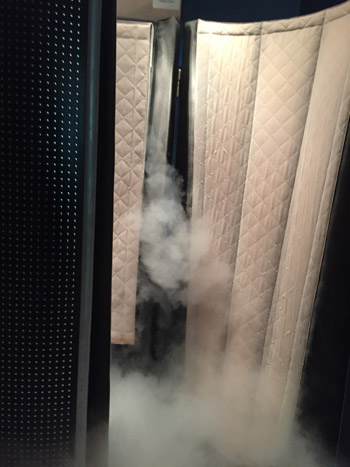 The woman in the room informed me that I was nearing the 1.5 minute mark and that this was all that was necessary for my “therapeutic effect,” but I was going all in and staying for the full 3 minutes. The next minute and a half went by very quickly, although there were some moments that deep breathing and even a quick grunt were exhibited. I heard the machine beep, and I was lowered and placed my robe back on.

The woman told me that, because it was my first time, the temperature was only -211 F. I then changed my clothes and was told that, if I wanted to, I could hop on the stationary bike or row the ergometer that they had in order to warm myself up. I changed my clothes and hopped on the stationary bike, but after 1 minute felt that it wasn’t necessary as I didn’t feel very cold at all. Just the same way 90 F in a dry climate is much more tolerable than 90 F in humid and muggy Washington DC, -211 F was really not that bad when there’s no moisture involved. 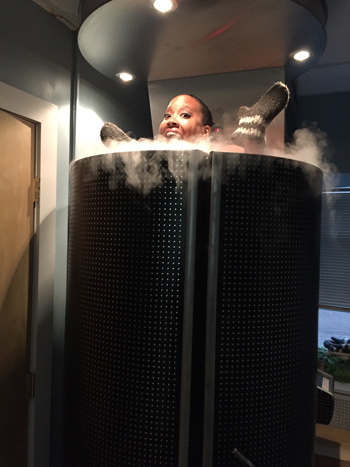 Now for those therapeutic claims… I walked into that office with about a 3-4/10 pain in my right calf from a strain I endured playing a soccer game 5 days prior along with about 2/10 pain in my lower back from enduring a 4hr car ride without getting out on my travels from Washington, DC to the suburbs of New York City. I also arrived still fairly tired from the feast of the day before.

When I stepped out of my science fiction alien abduction appearing icebox, I was still at a 3-4/10 pain in my right calf, 2/10 pain in my lower back and still needed a nap due to the increased amount of starchy carbs and tryptophan in my system.

Another claim of the cryosauna which I did not mention before was that it would cause me to sleep really well that night due to my metabolism having been boosted. However, I could not sleep until about 1:30 AM and then did not sleep very well at all. Now to be fair, the quality of sleep could have been because of the mattress that I was forced to sleep on, but anybody that knows me knows that when the clock strike 10PM, if I’m not at a soccer game, I’m in Sleepytown, Dreamland.

Would I recommend a cryosauna experience to anybody for therapeutic reasons? Probably not, but if you are looking for a fairly pricey 3 minute tactile experience, go for it, if not for the pictures alone.