How many gym-goers do you know who roll the sides of their legs up and down a foam roller before or after a workout? Throngs of people feel that they are doing themselves a service by mashing the “ITB”, or iliotibial band, in a fashion that resembles using a rolling pin on dough. I have done this on myself, and I must say that it is painful and a waste of time! 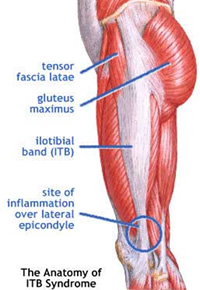 Take a look at the illustration of the ITB and the surrounding structures. The ITB is a dense “cob-web like” band of strong connective tissue that runs from the pelvis down the side of the leg and terminates just below the knee. If you look closely at the illustration, you can see that the gluteus maximus attaches to the ITB from behind and the tensor fascia lata attaches to the ITB from the front. This muscular attachment is vital in understanding why the ITB becomes tight and painful.

The gluteus maximus and the tensor fascia lata are often involved in an epic tug-of-war battle over control of the ITB. The gluteus maximus (buttock muscle) is often on the losing end of the battle: those of us who sit all day tend to lose strength in the gluteus maximus. The tensor fascia lata muscle will often become dominant and pull the ITB slightly out of place resulting in pain. This pain can be manifested along the side of the knee or up higher along the side of the hip as the ITB rubs up against bones that it normally should not make contact with.

Some people will insist that rolling out the ITB with a foam roller will lessen the pain associated with ITB tightness. This may have a temporary effect, but the reality is that the dense tissue of the ITB does not “stretch” like muscles stretch. The ITB does not have any contractile element to it: the only way that we could actually get a lengthening of the ITB would be to tear it.

It is a better idea to work on stretching, strengthening, or foam rolling the muscles that attach to the ITB. The single best thing that someone suffering from a tight ITB can do is strengthen his or her gluteus maximus!