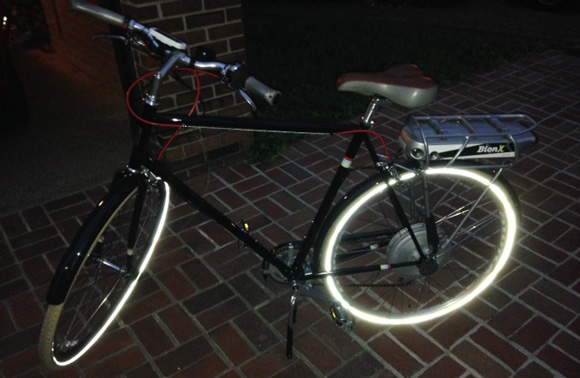 Washington, D.C. is becoming a bicycle-friendly city. There are now many main thoroughfares that have delineated bicycle lanes for those of us who choose to commute to and from work in this manner.

At first I was reluctant about using my bicycle as a primary means of getting around in the city. Now, I wouldn’t have it any other way. I can get to and from work at least as quickly as I would if I drove my car or took the Metro subway. Many of the bicycle lanes are actually buffered from moving traffic by parked car lanes, making it a much safer means of transport than in years past.

I did, however, hit a problem last month with my bicycle commute when I moved my residence further up into the residential section of the District. My commute is now hampered by several huge hills. I hate to be a complainer, but the hills on 15th and 16th streets leading out of the city are brutal. On a daily basis I see people who resort to walking their bicycles up portions of these streets, simply because they cannot generate enough pedal torque to keep their bicycles moving.

My solution has been the purchase of an electronic pedal-assisted bicycle.

Patients have made comments in regards to my course of action. I have been accused of being both lazy and hypocritical. How could I as a health care professional endorse a means of transportation that lessens the amount of cardio exercise performed? Allow me to plead my case.

The electronic pedal assist uses an inconspicuous lithium ion battery powered system that rests on top of a small metal rack over the rear tire. This system provides added torque to each of my pedal strokes. However, it does not provide any help when I am not actively pedaling. The system also automatically powers off when the bicycle speed exceeds twenty (20) miles per hour.

I have four different levels of torque assist, ranging from mild to substantial. I have found that using the mild assist is helpful for level surfaces, as the added weight that the battery and crank system adds is substantial (the bicycle weighs about forty-five pounds). For steep hills, the added assist allows me to cruise around fifteen miles per hour. I get home in half the time that I did while riding a conventional bicycle.

The unexpected benefit that I have found is that I am still getting a fantastic work out, through both cardiovascular effort and through muscle fatigue in my legs. The psychological “rush” that I get with a pedal assist makes me want to pedal constantly. I have also found that I will try to challenge myself by lowering the pedal assist for certain portions of my trip.

I have had my bicycle now for about one month, and I must say that it is a fantastic option for people who want the peace of mind that comes with knowing that you will make it up hills without killing yourself. It is also great fun to pass bicycle messengers and people half your age. I have found that you can also quickly accelerate if you need a quick start from a stopped position.

However, there are a few issues to consider in purchasing a pedal assist bicycle. As I mentioned before, they are heavy compared to conventional bicycles. If your battery runs out (I am finding that I need to charge my battery every fifteen to twenty miles), you will find it very strenuous to get your bicycle from point A to point B, although it is doable.

Secondly, it is not a good idea to leave this type of bicycle unattended outside, even if it is locked up. These bicycles are expensive, and I am sure that bicycle thieves would jump at the chance to steal one.

The jury is out in terms of maintenance. I do not know yet how often I will have to have the system repaired. I can assume that it will cost substantially more than a normal bicycle fix. I also place a plastic bag over the battery system when it is raining outside. I have found that it works fine in rain, although I recommend toweling the bicycle off afterwards.

I am thrilled with this purchase thus far.